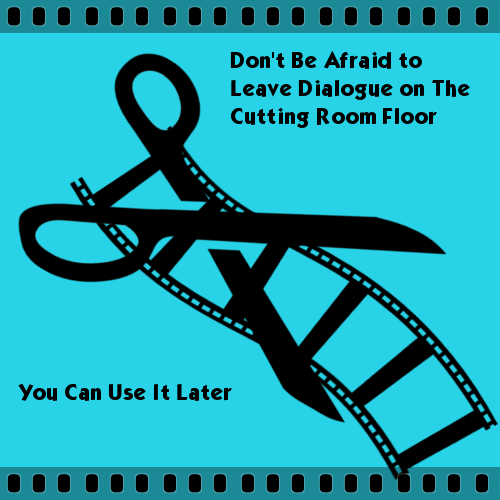 Okay, so you know how you end up writing several pages whether it’s your character’s inner dialogue or between two or more characters, only to find that you need to cut, cut, and cut some more? But what if some of that dialogue is important either to the storyline or the development of the character? I’ve come across this issue in the past, and I am dealing with it as I write chapter 8 of Game of Power.  What I found out is that sometimes certain scenes, detail, or dialogue is unnecessary for what the storyline calls for at the moment. Having too much text that doesn’t further along anything at the time can weigh the momentum of the story down. However, the same informational dialogue could be essential for your character’s development. I’ve often had to cut it and add it later either by presenting it differently through the same person, giving the lines to someone else or inserting it in a different chapter. Be careful when adding back in specific details or text so that it doesn’t seem unnatural. Make sure it still flows and doesn’t look out of the ordinary or just placed there for filler purposes.

For example, in my first story Reagan Leeds: Run The World (I won’t give any spoilers away for those who haven’t read it) it was very dialogue heavy and a lot of the chapters were lengthy. Towards the end, there were important conversations that needed to be held between Reagan and other characters that were essential to her story, not just that but required for their development. I had to cut some of Reagan’s inner thoughts and turn them into a conversation she had with someone. Because how would this person know what was on her mind as she was struggling with a family crisis? If I let Reagan drone on and on for an entire page, it would’ve slowed down the pace, but have her openly express her thoughts with others allowed for meaningful banter and things she was able to absorb and reflect on.

I admit many of my chapters could’ve been more heavily edited, but as I grew as a writer, I learned to do these tricks and tips, so the story didn’t come to a complete halt when we got inside Reagan’s head or even some of the other characters who had their POVs.

More recently, in GOP chapter 1.2 The Games Begin when Rico is telling his assistant Cressida about the sexual harassment scandal with Grazier Technology, initially, that was all apart of his inner dialogue and he was only talking to the audience. I needed a way to pull that out and show his relationship as a boss with an employee who’s more than just an employee. Cressida is his go-to person; she knows Rico so well. It also established what Cressida’s role was at Thomas Global Strategies and we can see how things work a bit in their work environment.

I know this was a long post, but I was inclined to write it as I think about the editing process once I’m done with my chapter 8 draft. I’m not in a rush to push the speed of Bella’s story, and her relationships with her family don’t need to be detailed entirely right away. I can give the reader an idea of the Vega family dynamic without dragging out the scene unnecessarily. I hope you enjoy chapter 8.

Thanks and Happy Writing!

5 thoughts on “Don’t Be Afraid to Leave Dialogue on The Cutting Room Floor; You Can Use It Later”